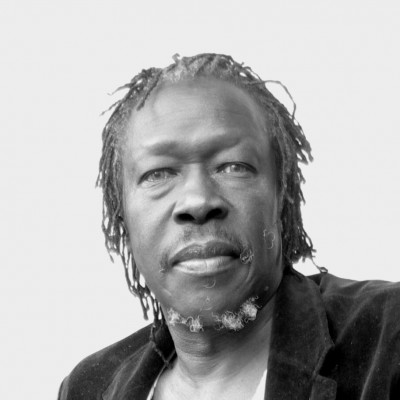 Geoffrey Oryema is an internationally renowned musician who was born in 1953 in Soroti, Uganda. His father was a politician who rose to the rank of minister and his mother was a director of the national dance company called The Heartbeat of Africa.

Geoffrey’s family was immersed in Uganda’s traditional cultures and were storytellers, poets and musicians. As a teenager, Geoffrey wrote songs and learned how to play the guitar, flute and lukeme (a metal thumb-piano).

In the early 70s, Geoffrey’s ambition was to be an actor and he enrolled in Uganda’s Drama School of Academy. He founded an African drama company, Theatre Limited, the first Academy of Dramatic Arts and professional theatre troupe of its kind in East and Central Africa in the 70s.

Geoffrey studied drama and specialised in the methods of acting pioneered by Konstantin Stanislavsky and Grotosky’s avant-garde methods of acting. Mixing these techniques with traditional African theatre, the result was a very original ‘theatre of the absurd’, embellished by African tribal sounds and improvisation.

In the mid 70s, the fortunes of the Oryema family took a serious downturn. Oryema’s father, a minister in Idi Amin’s government, was killed in February 1977. Geoffrey and several members of his family decided to flee the country in fear of their own lives. With the help of friends, Geoffrey was smuggled across the border to Kenya in the trunk of a car. After a long and arduous journey, Geoffrey ended up in Paris where he settled and learned French.

Geoffrey found a receptive audience to his music and he developed a huge range of musical styles. He incorporated the traditional music of Uganda with the western music of the 80s.

In 1989, Geoffrey was spotted by a representative from WOMAD Festival looking for talent in Paris. This led to an introduction to Peter Gabriel and his Real World label, who arranged for Geoffrey to work with the eminent producer Brian Eno. Together they made the album Exile, which was based on Geoffrey’s experiences as a youth in Uganda. It brought critical acclaim and established Geoffrey’s reputation as a significant African singer-songwriter.

In 1990, Geoffrey performed at the Nelson Mandela concert, An International Tribute for a Free South Africa, held at Wembley Stadium in the UK. It was held two months after Mandela’s release from prison. He sang alongside an impressive line-up of stars including Lou Reed, Neil Young, Peter Gabriel, Tracy Chapman, Terence Trent D’Arby and Youssou N’Dour.

Geoffrey embarked on a globe trotting adventure with the WOMAD world music festivals in Australia, the USA, Japan, Brazil and Europe.

In 1996, Geoffrey recorded his third album, Night to Night, sung primarily in French and English, with masterful musicianship and wonderful melodies.

After this, Geoffrey moved to Sony International. He moved away from Paris for the quieter life in the west of France.

In July 2005, Geoffrey performed at the LIVE 8: Africa Calling concert in Cornwall, and with 1 Giant Leap at the Live 8 Edinburgh concert.

Since 2005, Geoffrey has been touring the world performing to large audiences and a few intimate solo shows. These include The Creation of Peace Festival in Kazan, Russia, where he played to 200,000 people; two concerts at the United Nations in New York; and a prestigious concert for the Cinema For Peace Award Ceremony at the historic Konzerthaus in Berlin.

Geoffrey released From The Heart in 2010 (Long Tale Recordings) and is working on another album for release in 2017.